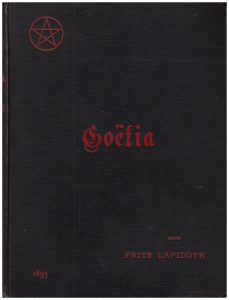 catawiki.  This one of a kind collection focuses mainly on (symbolist, decadent, modernist) art and literature and contains many extremely rare novels, artists’ novels, early feminism, fin de siècle-erotica and virtually unknown translations.
Some items which could be of interest for European fin de siècle-scolars are an unknown translation of an erotic novel by Marcel Prevost, a hitherto never seen translation of work by Yellow Nineties-writer Hubert Crackanthorpe, an extremely rare translation of pioneering feminist George Egerton, one of the very earliest Zola published in the Netherlands, George Ohnet, an unfindable translation of proto-decadent Jean Richepin, rare books concerning the early reception of Vincent van Gogh, a curious ‘Russian’ novel, rare Wildeiana, and an illustrated edition of Villiers de l’Isle Adam.
Al these books are in Dutch though but it happens that one book that is sure to be of interest to the aforementioned fin de siècle-scolars is in German, a language that is probably familiar to at least some of them.

As you all know, Satan is a friend of mine but not of the Dutch nor the few (academic)  fin de siècle-scolars as the interest in symbolism, occultism decadentism and satanism has always been zero to none here. ‘Doe maar normaal, dan doe je al gek genoeg.’, as the Dutch say.

Nevertheless Goëtia by Frits Lapidoth  should be of interest to anyone with even a passing interest in European literature from around 1900 as should be clear from catawiki’s description:

‘*Virtually unknown decadent novel [first Dutch edition 1893] , inspired by Huysmans’ satanist novel Là-bas. The Goetia of the title is a Russian princes who has an occult salon in fin de siecle Paris. She’s is named after the black magic practice as described by Agrippa: ‘Now the parts of ceremonial magic are goetia and theurgia. Goetia is unfortunate, by the commerces of unclean spirits made up of the rites of wicked curiosities, unlawful charms, and deprecations, and is abandoned and execrated by all laws.’
About Peladan, Stanislas de Guaita, Magus etc. It has never been studied by international studies on Occult Paris. Very rare.’

Although in the 1890s it was seen as an important book by allmost any Dutch critic it soon dissappeared from sight due to the aforementioned lack of interest. The only two people who wrote a few paragraphs about it more than twenty years ago (the Flemish pulp writer Jeroen Brouwers and literary scolar Jacqueline Bel) did so somewhat scornfully and seem not to have taken the trouble to actually read the novel attentively.

Although this German translation is by the renowned Else Otten who also translated Louis Couperus, Lapidoth is not mentioned by Mario Praz in his classic study on ’the romantic agony’ while he must have been familiar with Ottens translation of Couperus (who is mentioned).

Lapidoth wrote his Huysmans’ inspired novel in Paris in 1891 and 1892 (where Couperus might have visited him by the way) and, being a journalist, must have done extensive research and probably knew about the people and things described in his novel from his own experience. That he was well acquinted with French modernism is clear from a book he wrote about French artists like Redon, Cheret and Steinlen which he wrote in this same period.

Via his personage Goëtia Lapidoth informs his Dutch (and German) readers about many of the things Huysmans wrote about in his study of contemporary French satanism which was in its turn described by this fenomenal study on ‘ Occult Paris’ (whose author as far as I know wasn’t familiar with Lapidoth neither).

So to give my non-Dutch speakin’ readers an impression of this, in my humble opinion at least, most interesting ánd amusing ‘lost novel’ I translated some paragraphs (from the Dutch edition) for your diabolical readin’ pleasure.

O, she [Goëtia] could not stand them, none of them: those French occultists who, despite all their

knowledge, couldn’t even work together and just called each other names. The Sar Péladan, a squire of the salons, dressed in the most foolish clothes, the man who has spoken evil of women more than anyone while eating out of little white ladies’ hands at the same time; who brags about his chastity while receiving ladies, dressed in tantalizing outfits; the leader of the party who has his ass kicked while refusing to fight a duel in order not to have his magical purity blemished…!
Decidedly ungallant in every sense of the word. But at the same time he was a mad and dazzling charlatan, a charlatan in the tradition of the anonymous writers of magical books. Péladan has created a legacy, books which get little heads running. She thought his ambitious  Décadence latine a worthy successor to the ambitious gibberish of the seventeenth century.
There was something special about these books and at least Péladan had his own style. And besides, that Péladan organised things. People spoke of a ‘Salon du Rose et Croix’ where one could only see mystical art and where mystical music would be played. But Péladan was a devoted Catholic and a loyal servant to the Pope. Magnus did not believe in God, not in in  immortality. She would have thought that audacious if he had not stolen from the Buddha, from the gnostics, from the spiritists.
None of these small souls, not even their predecessor, the oftentimes spiritually ransacked Eliphas Lévi, had the guts to admit their weakness for Satan, for the spirit which inspired most of their dear old writers. Nobody dared speak of Satanism. Satan! After Jules Michelet and Alfred Maury nobody came to his defense.

A small salon of Olga’s hotel was remodeled as a ‘Apparition Room’ and set up in a way that the believers, when entering, already felt to the core  the thrill they longed for, and is seen by our modern miracle workers as their best ally in the battle against the little that remained of the commons sense of their public. The walls and ceiling were covered with black vellum, ornated with silver stars. At the four corners skulls were grinning. On a small altar, covered in velvet seven large black candles were burning, illuminating the yellowed pages of a centuries old book on magic. (…) Its red capitals seemed made of blood. (…) To the ceiling seven silver chains were attached, carrying silver pentagrams.

Image 1: cover of the original Dutch edition of Goëtia (private collection)
Image 2: cover of the German edition (courtesy of Catawiki).