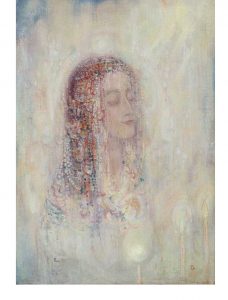 which might interest the readers of this website. One of them is The Bride by Frans Stamkart about which Sander Bink wrote the text below, which we reproduce here with kind permission of the author and mr. Ubbens.

Provenance: descendants of the artist.

Stamkart was a Dutch painter, draughtsman and designer about whose life virtually nothing is known. His works are very rare and sought-after examples of mystical/occult symbolism though. In or around 1897 Stamkart was a pupil at the Amsterdam Academy of Arts. Allegedly his fellow artists there saw him as ‘a talented artist and one that soon disappeared from the spheres of normality and regular daily live. A disappearance like this is certainly not an evil thing: bottled wine likes to mature in the dark.’ (Alb. Plasschaert, ‘Stamkarts Lucifer’, Amsterdammer, 15 April 1915. Transl. S.B.) This is characteristic for Stamkarts art, which seems to come from a private universe, far away from the reality we know. In this his oeuvre is comparable to that of artists like Gustave Moreau, Odilon Redon or Karel de Nerée.

Traces of Moreau can be seen in the ornamental jewelry in the bride’s hair. And like Redons surrealistic figures she seems to float in the paintings space, with no direct connection to our reality.

The painting is undated, but it probably stems from the artists’ early years 1900-1905. One more general argument is that most of Stamkarts later work, from circa 1915 onwards, are black and white chalk drawings of a far larger size. But more specific is the resemblance in technique and style to the oil painting Avondgang in the collection of the Kunstmuseum, Den Haag, which is also made with what seems to be a similar red paint. Avondgang has been dated as being from 1902 or earlier, as it seems to have been exposed at the Prima Esposizione Internazionale d’Arte Decorativa Moderna in Turin 1902 (cf. exhibition catalogue Kunstenaren der Idee. 1978, cat. no. 120). At that important art nouveau/modern art exhibition Stamkart made the murals for the booth of The Hague Arts and Crafts art dealer Uiterwijk. He also exhibited some paintings. No titles are known but they were characterized by the theme of light. The critic George Fuchs wrote admiringly about these paintings in Deutsche Kunst und Dekoration:

‘(…) these festive paintings by Frans Stamkart: these tributes to the light, to the holy light of creation, they well up from between the pillars with comforting and soft sounds which bring to pious souls respect for the holy images of the birth of Christ.’ (transl. S.B.)

The title The Bride comes from family lore, but it is very plausible this was indeed the title Stamkart gave to it. The Bride certainly radiates which mystical light, it looks like she is the source of light. That does not mean this work should in the first place be interpreted as a religious work. The bride was a common theme with symbolist artist, with Johan Thorn Prikkers The Bride (1892) or Jan Toorops Three Brides (1893) as fine Dutch examples. Although the theme was certainly borrowed from, inspired by, medieval and Renaissance religious art, it was a tribute to Womanhood as well as an affirmation of the Mystic. The symbolist Idea of there being more to life and to the soul than could probably ever be grasped but which symbolist artist tried to represent with their art.
All in all, a fascinating and rare work by one of the most elusive of Dutch symbolists.