[The following text first appeared on the site of Onno van Seggelen
Fine Arts, where 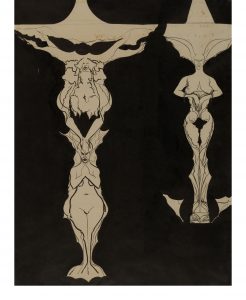 additional info about this special and most interesting of De Nerée’s works of art can also be found. It will be on view, and sale, at the Salon du Dessin, Paris, 27 march  – 1 april.]

*This is one of probably six works the Dutch decadent-symbolist Carel de Nerée made for a design contest of the German cocoa manufacturer Henkel und Stollwerck in June 1904.  Two of these are in the collection of Museum Arnhem, the others are in private collections. These works are among the finest this artiste d’exception made and so is certainly the here offered Rococo Vases.

The Rococo-theme was popular with the decadent artists of the fin de siècle and De Nerée uses it in other works as well, like the Rococo nude on a tabouret (1904, private collection).
It is also important as this seems to be the only occasion on which De Nerée, who did not exhibit during his lifetime and only very rarely gave work away to friends, let alone sell something, seems to have been prepared to show his unique work to the outer world.
Other artists who made designs for Stollwerck were Heinrich Vogeler, Max Liebermann, Adolf von Menzel, Walter Leistikow and Otto Eckmann.
According to the regulations as put forth in the Kunstgewerbeblatt. Vereinsorgan der Kunstgewerbevereine Berlin […] the designs had to be in black and white and measure 25 by 34 centimeters. The winner would be rewarded 2000 marks which was a lot of money for the aristocratic but always short on money De Nerée. But one wonders what the artist was thinking as all the Stollwerck designs feature unmistakably voluptuous women, the Rococo Vases actually being sexually explicit, more than any other Dutch work of art from the period.

Upon seeing it for the first time renowned Dutch art critic Joyce Roodnat was astonished:  ´And that one drawing tops it all. It´s a design for a slim vase, based on elongated women with big leaking breasts. I see lust. This is a Rorschach test in which only a hypocrite would not see a vagina. And neither would the ignorant.’ (NRC, 29 November 2014).
In other words: ‘dirty minds think alike.’ There is a curious parallel with The  Mountain of Light (1905-’06) which Dutch author Louis Couperus was writing in the period De Nerée was working on his design. Couperus was greatly admired by De Nerée and was a possible acquaintance. There’s a passage in this decadent novel where ‘Lesbian Nereids’, ‘enormous male rods’  and ‘Tritons who merrily rode each other’ become one with ‘grinning masks, whose mouths split open to form gaping femininities’.

It is unthinkable that the Rococo Vases would ever grace advertising posters or chocolate wrappers, it is simply too subversive. That might have been the reason it was not shown at the first De Nerée exhibitions which took place 1910-’14. The artists seems to have realized this, seems to be overwhelmed by what he created and did not finish it but still making one of the most bizarre, almost Freudian, works of art of the fin de siècle.